The question of whether cutting a circular shallow water corner saves time is explored. Turn radii criteria are derived using a Froude Number-based equal effort metric in terms of the depth-dependent surface wave phase speed. The result is recursive. The effect of spanwise current variation is considered.

WHAT DO YOU MEAN BY CUTTING CORNERS?

Here’s a question that keeps popping up from Science of Paddling Readers[1]: When is it advantageous in a race to cut a shallow water corner? Turns out this is a far more complex question than it may at first seem. To precisely answer it requires knowledge of at least the following factors:

Each of these factors introduces its own complications. Many can only be addressed via numerical simulation; this would be highly specific to a particular turn, in a particular river, and to particular hulls. Where’s the fun in that?

Instead, in order to approach the problem of cutting corners we’ll introduce a number of simplifying assumptions that yields something tractable, yet still provides insight into the problem. [2]

Remember the Science of Paddling, Part 4: Shallow Water? You might want to give it a quick review before diving into this one.

In order to narrow the corner-cutting problem to something tractable, we’ll make the following assumptions:

Consistent with all of these assumptions, consider the turn depicted in Figure 1. Two hulls are entering a 90-degree counter-clockwise turn at the same time, running abreast. The first will follow an arc of length P1 at a radius R1 over an angle

ranging from 0 to 90 degrees[3]. The second will follow an arc of length P2 at a radius R2 over an angle

also ranging from 0 to 90 degrees. The water at radius R2 for all angles

is assumed to be deep. The subtended angles are shown to be equal since we’re interested in determining how small a radius R1 the inner hull can follow in order to keep up with the hull in deep water. We’ll examine the effect of different stream speeds V1 and V2 on the respective hulls later. For the moment we’ll set these equal to 0 for reasons noted above.

One model of the bottom bathymetry versus radius is depicted in Fig. 2. As noted above the outer radius lies in deep water; again, “deep” means anywhere greater than about half the hull length L (e.g., L/2) in depth. The allowable range of the outer radius R2 is shown to extend from a depth of L/2 outward, consistent with the deep-water assumption for the outer hull.

As you’ll recall from Part 4, a nondimensional Froude number[4] Fr can be defined as the ratio of hull speed V to the phase speed of surface water waves cp:

When the hull speed is greater than the phase speed the Froude number Fr is greater than 1. This means you’re paddling faster than the water surface “wants” to move, and as a result the effect of wave drag will increase. (It’s similar to how a resonator likes to oscillate at its resonant frequency; the water “spatially resonates” with objects moving over it that have length equal to the surface wavelength corresponding to the phase speed for a given depth.)

We’ll introduce another assumption: Both the “inner” and the “outer” hulls are paddled at the surface wave phase speed corresponding to their respective water depths. In other words Fr = 1 for each hull. This is one way of stating that the paddling effort in overcoming wave resistance is the same for both hulls.[5]

Given these two hull speeds – really, two surface wave phase speeds since the Froude number for each hull is assumed to equal 1 – the problem reduces to finding the radius R1 for a given inner hull water depth D that let the two hulls keep pace with each other through the turn.

One way to characterize this is to determine how far each hull travels in a given time T, then solve for the respective radii that let the two hulls cover the same angle

and thus stay abreast of each other. From high school physics you’ll recall that distance equals speed times time. For the inner hull, consistent with the assumptions, this means the path length equals the surface wave phase speed multiplied by time:

where we have used the expression for the surface wave phase speed cp from Part 4 for the along-track hull speed (recall that Fr = 1). g is the acceleration due to gravity. The depth D is written as a function of the radius r; this dependence will be an important consideration in a moment.

The hyperbolic tangent function displays a nice sigmoid-like behavior as a function of its argument, with asymptotes at +/- 1, shown in Fig. 3 for an 18’6” long hull and various depths D. 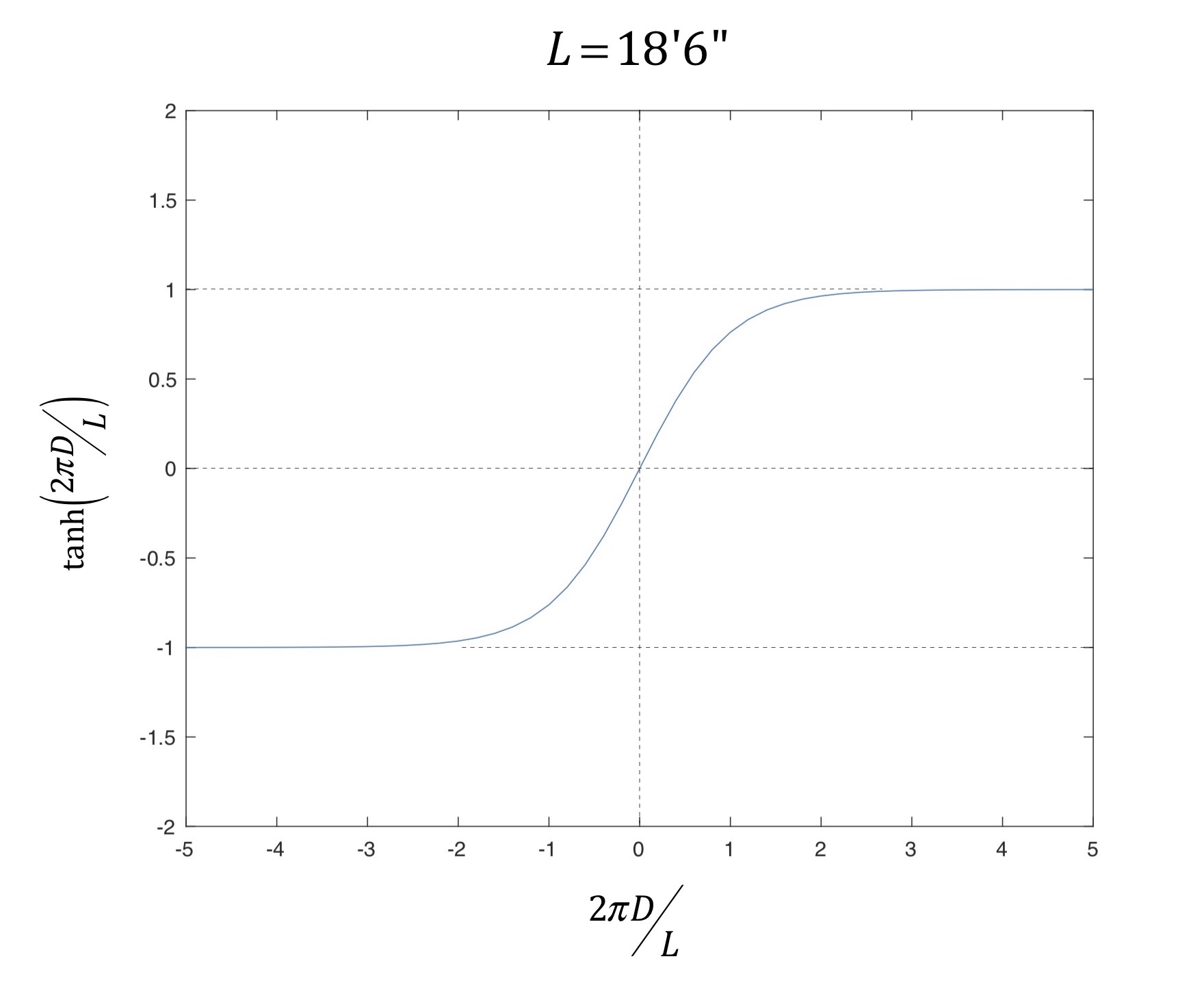 As you can see in the plot, for values of its argument having magnitude[6] greater than about 3 that tanh(.) is well approximately by the constant 1. This corresponds to deep water with respect to the hull length. Consequently, for the outer (deep water) hull, the path length equals the surface wave phase speed for deep water multiplied by time:

Now the hulls are assumed to paddle abreast, hence the angle

, and using the fact that things equal to the same thing are equal to each other,

This equation then defines the inner radius one can use to “cut the corner” in shallow(er) water and keep pace with a hull further offshore paddling in deep water. It is implicit in this expression that the radius R1 is the radius at which the depth equals D. In other words, one cannot compute the expression for the surface wave phase speed for a given shallow water depth D (in the numerator on the left-hand side of the equation above) and then vary the radius R1 arbitrarily! The depth D is a function of the radius, as pointed out above; the problem is recursive[7]. Also, the radius R2 must be a “deep water” radius since the outer hull was assumed to be in deep water at that radius. And R2 must be greater than R1.

All that said, the expression above shows that in order to keep pace when the surface wave phase speed decreases due to decreasing depth (subject to all the assumptions above) for a consistent level of effort you have to paddle a progressively tighter turn in order to paddle a correspondingly shorter circumferential distance; the right-hand side of the equation is depth-independent, and fixed by the location of the outer hull’s arc and the hull length.

For small values of the argument, which here means small values of depth in relation to the hull length, you just retain the first term in the series; the magnitude of the cubed and higher terms will be much smaller than the linear term and can be neglected. This is illustrated in Fig. 4, where the exact form of the hyperbolic tangent is plotted along with the simple linear approximation for an 18’6” long hull. Interestingly, the approximation is best only for very shallow (perhaps 1.5’ deep and less) water. 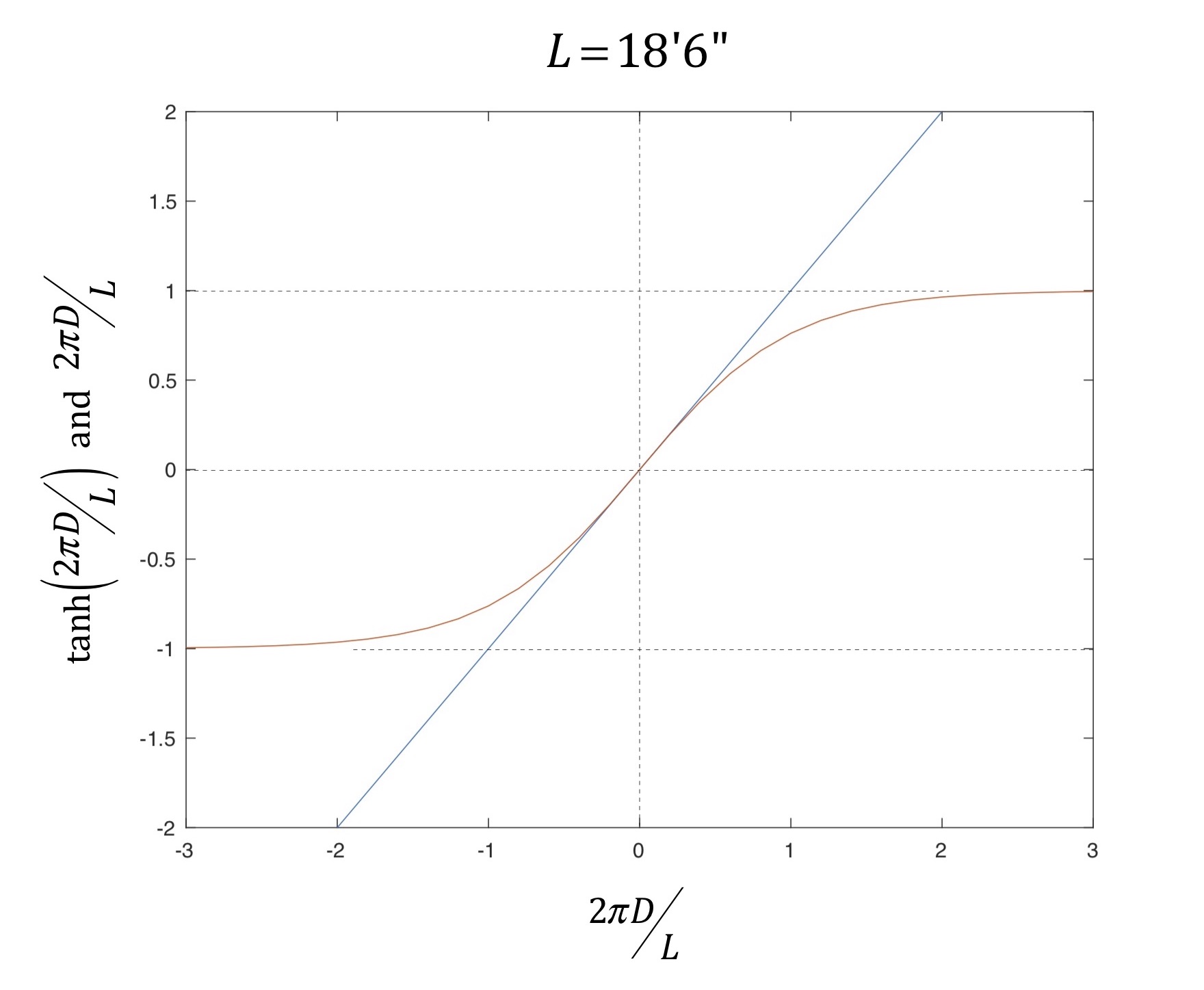 Consequently, for an inner hull traveling in shallow water you obtain the simpler expression for the radii as

which can be rewritten simply as

So for cutting shallow water corners consistent with the assumptions above, the turn radius that lets you keep apace with a hull traveling in deep water will vary as the square root of depth. This ratio is plotted in Fig. 5 for the approximation above, as well as for the “exact” expression that uses the hyperbolic tangent function. Fig. 5 shows that the exact and approximate solutions diverge at about 1’ of depth; above about 2.5’ of depth the approximation becomes nonsensical since it suggests the inner radius be greater than the outer radius (and thus contradicts one of our assumptions). So sorry, folks. If you felt squidgy about the hyperbolic tangent function you’d best learn to embrace it.

You can use Fig. 5 to select an inner radius R1 to cut the corner corresponding to a depth D (remember the assumptions!) with respect to the outer radius R2. Perhaps most interesting is what happens when the water depth approaches 4.5 – 5’, at or just a little deeper than so-called “concrete water.” In that case the radii ratio (using the exact solution) asymptotically approaches 1. At this 4.5 – 5’ depth the inner hull radius moves toward the deep-water radius of the outer hull. This is because both hulls are now in (effectively) deep water. Why do they become equal? Because we were solving for an inner radius that enabled the hulls to run abreast, not for an inner radius that let the inner hull emerge from the turn ahead! For deep (enough) water deciding to cut a corner is only a distance minimization game. This means that if both hulls are in deep enough water, definitely cut the corner since there is no wave drag differential between the two hulls. Otherwise, carry Fig. 5 with you and plan accordingly! 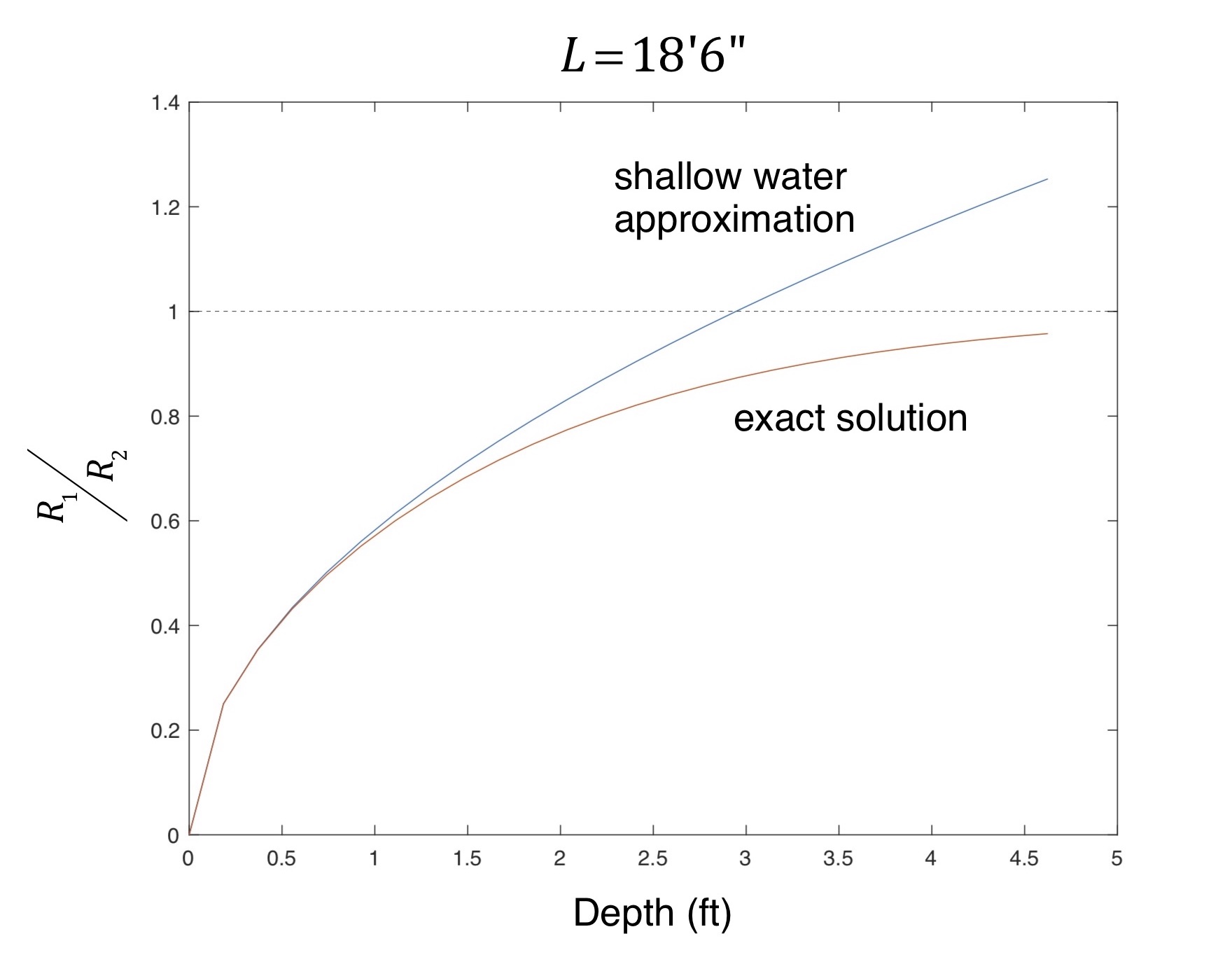 THE EFFECT OF CURRENT

It’s straight-forward to introduce current into the analysis above. If the inner hull travels in a constant current with speed V1 throughout its turn, then the circumferential arc length it subtends over time T to keep abreast of the outer hull is simply a restatement of distance equals speed times time, where speed is now the sum of the phase speed and current speed:

Similarly, for the outer hull

Solving for the angle q, and equating things equal to the same thing yields

Assuming the inner hull is paddling in shallow water, consistent with the assumptions above one derives

which can be rewritten as

So if you know the shallow water depth D at R1 as well as the current speeds at the respective radii you can compute the radius for “cutting the corner” that keeps you abreast of the hull in deep water. Or for intermediate depths you can use the exact expression.[9]

The chief limitation in using this result is obtaining the respective current speeds V1 and V2. There are innumerable references that address stream flow in aggregate (see the References section below for examples), providing models of sedimentation transport for a given streambed and flow rate, flow rate as a function of level, etc. But none of these provide cross-stream flow speed data or models. If you have the flow speed data you can crunch the numbers. Otherwise you’re left with making assumptions that likely won’t generalize across a set of rivers, or even turn-to-turn for a given river.

In this installment of The Science of Paddling we considered the question of whether cutting a circular shallow water corner saves time, or at least keeps you abreast of a hull in deeper water. We derived a turn radius criteria using an effort-relevant metric derived from the depth-dependent surface wave phase speed. The radius you can paddle to keep apace varies as the square root of depth if you’re already in shallow water; for other water depths it’s a little more complex. Further, the result is recursive, for reasons noted above. Don’t forget your calculator! Or bring along a copy of Fig. 5.

The effect of spanwise current variation was considered, with the ensuing “corner cutting criteria” shown to require field data from actual streams and turns. Otherwise the analysis is unchanged.

Like many articles in the Science of Paddling series we’ve once again shed light on the why. It’s a bit more difficult to use the results above predictively unless you do some highly detailed scouting to determine the bathymetry of each and every turn on a course. It’s probably easier to just find someone who’s intimately familiar with the course, hang on their stern, and (as they say) settle it in the last mile.

Then again, if you’re interested in mapping out the course and doing some calculations, please share your results with us!