In this post – the sequel to Part 25: Impulse Part 1 – we characterize the role of force, cadence, and power phase duration in propulsion. We’ll also investigate whether distance per stroke is a fundamental parameter driving our hulls, or whether it is a derived (e.g., second order) property.

As you’ll recall from Part 5: What Moves You, the motion of a paddled hull can be described in terms of its momentum p. Momentum is the product of the craft’s mass, plus the mass of its occupants and gear, times its velocity. Momentum is a vector (e.g., directional) quantity because velocity is a vector.[1] For this article we’ll only consider velocity’s magnitude in the direction of motion, which we know best as the hull’s speed. Hereafter ‘v’ refers to speed in the direction of motion. It is a scalar quantity.

Impulse quantifies a force’s influence in changing an object’s momentum. Since the mass of the hull and its contents is fixed, a change in momentum ∆p then corresponds to a change in its speed ∆v. This change in momentum corresponds to the impulse applied by the paddler via their paddle. With each stroke the hull speeds up during a stroke’s power phase, then slows down because of drag[2] until we initiate the next stroke. This cycle repeats itself stroke after stroke.

Impulse Dp is the product of the propulsive force Fp exerted over a stroke’s duration Dt,

This expression for impulse applies to all paddled craft, all paddling styles, and to poling as well.

We wish to characterize the role of force, cadence, and power phase duration on propulsion. In this article we’ll consider a bent shaft canoe paddle with properties and baseline operating values listed in Table 1. The analysis applies to any paddle or paddling discipline merely by specifying other values for these parameters.

Using the model developed by Caplan,[4] this paddle operating as specified generates the propulsive force versus time curve in Fig. 1. The paddle moves over a shaft angle range from –30 degrees to +50 degrees. We covered this model in detail in Part 11: About the Bend. 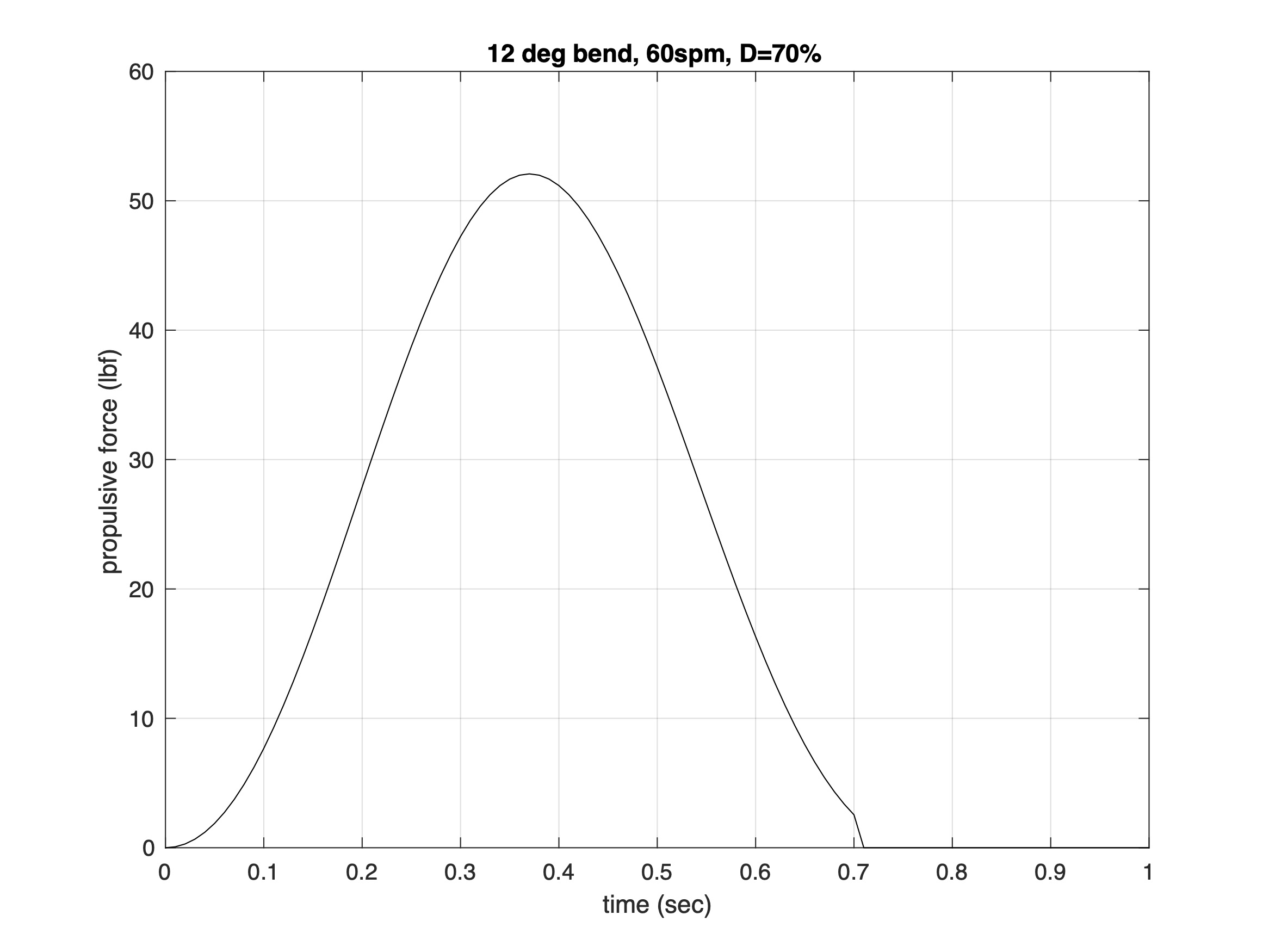 We’ll use this baseline model, and variations of it, in the rest of this article. We’ll begin by carefully defining what we mean by propulsive force.

When paddling we exert forces on the paddle’s shaft. In response, the paddle blade exerts a distributed force on the water, e.g., a pressure, over the blade’s surface. A fundamental tenet of fluid mechanics is that pressure must act perpendicular to surfaces. Here, it acts perpendicular to the blade at every point on its surface.

The net force exerted by the blade is the sum of these distributed pressures. The resulting force must itself be always perpendicular to the blade, irrespective of the blade angle. We’ll represent the net force as the vector F, as shown in Fig. 2 for a straight shaft paddle and in Fig. 3 for a bent shaft paddle.

We can measure the magnitude of the blade force F using (for example) strain sensors. And we measure it knowing it is always directed perpendicular to the blade’s power face. 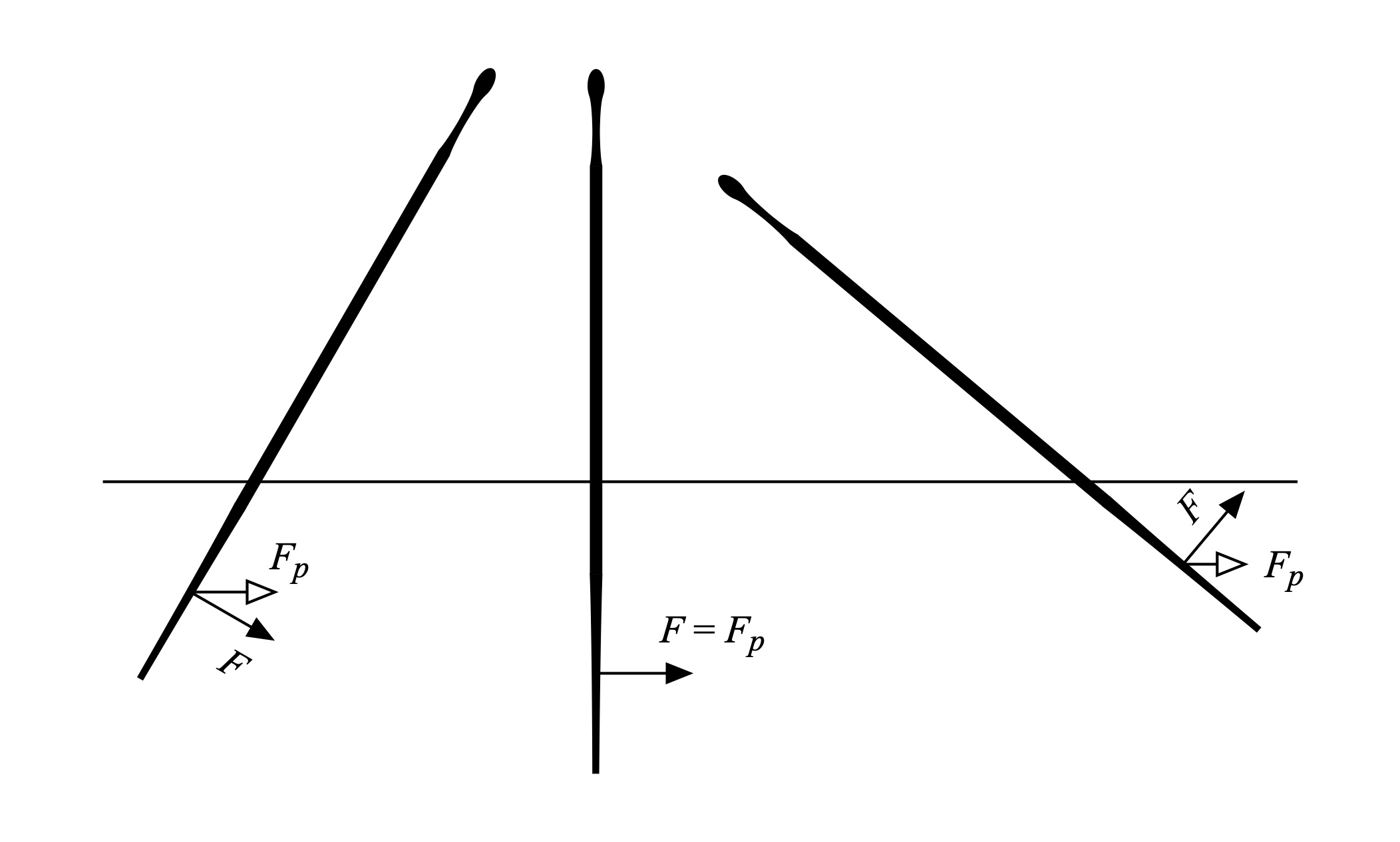 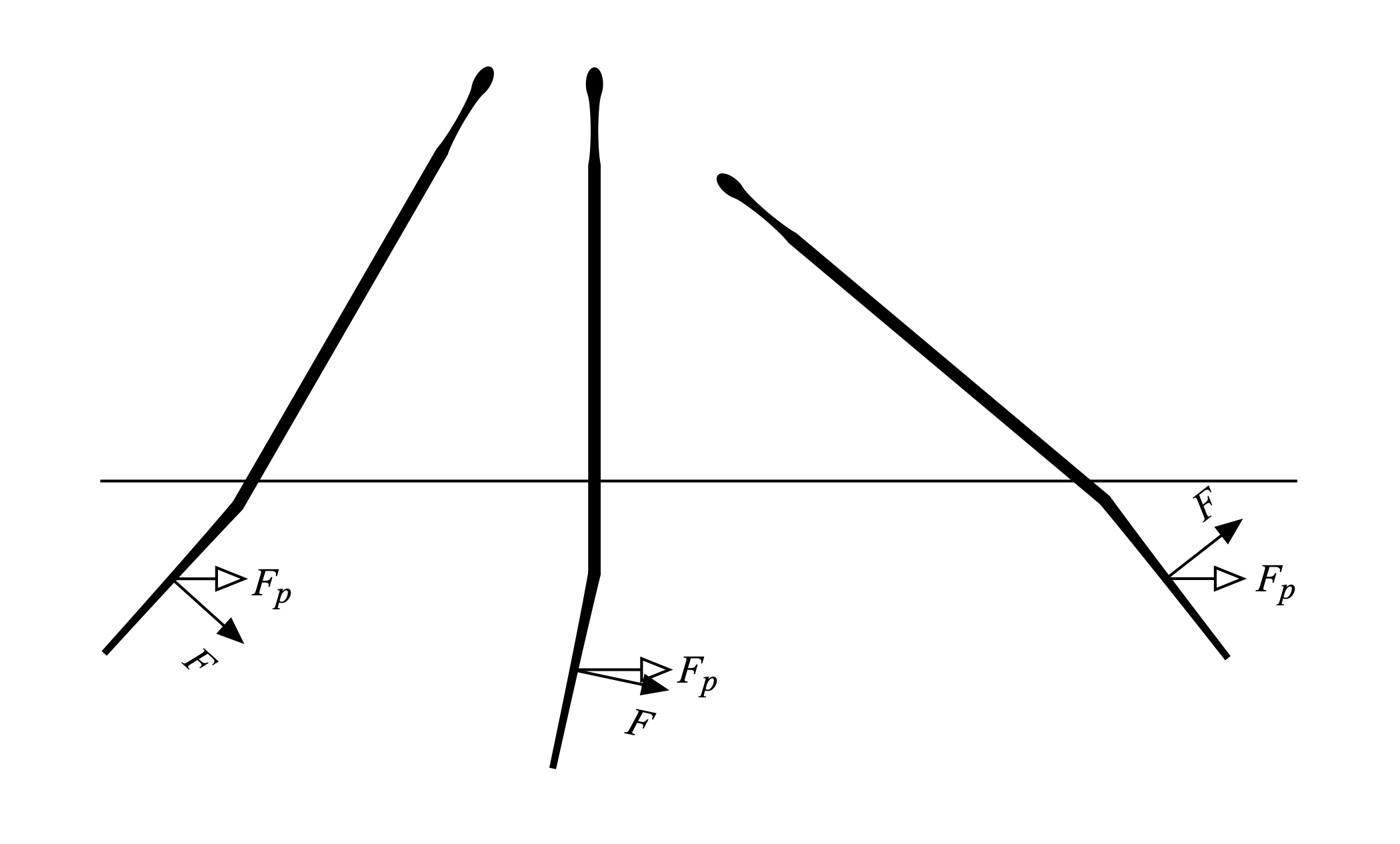 Consequently, we must weigh the net force F as a function of the blade’s angle with respect to the vertical to derive the propulsive force Fp. The way we do this is to measure the shaft angle and multiply the blade force by that angle’s cosine, as we did in Part 11: About the Bend. One can (for example) use a solid-state IMU to make this measurement. Thus,

where q is the angle of the shaft from the vertical, and f is the bend angle (if present) between the shaft and blade.

We have defined impulse in terms of a time interval Dt over which we exert a propulsive paddling force. Let’s carefully define what this time interval is for paddling. Much like walking or running has a gait cycle that corresponds to the various elements of leg motion during human locomotion (lift-swing-step-stance), the “paddle cycle” can be broken down into a sequence of events with corresponding durations as shown in Fig. 4. 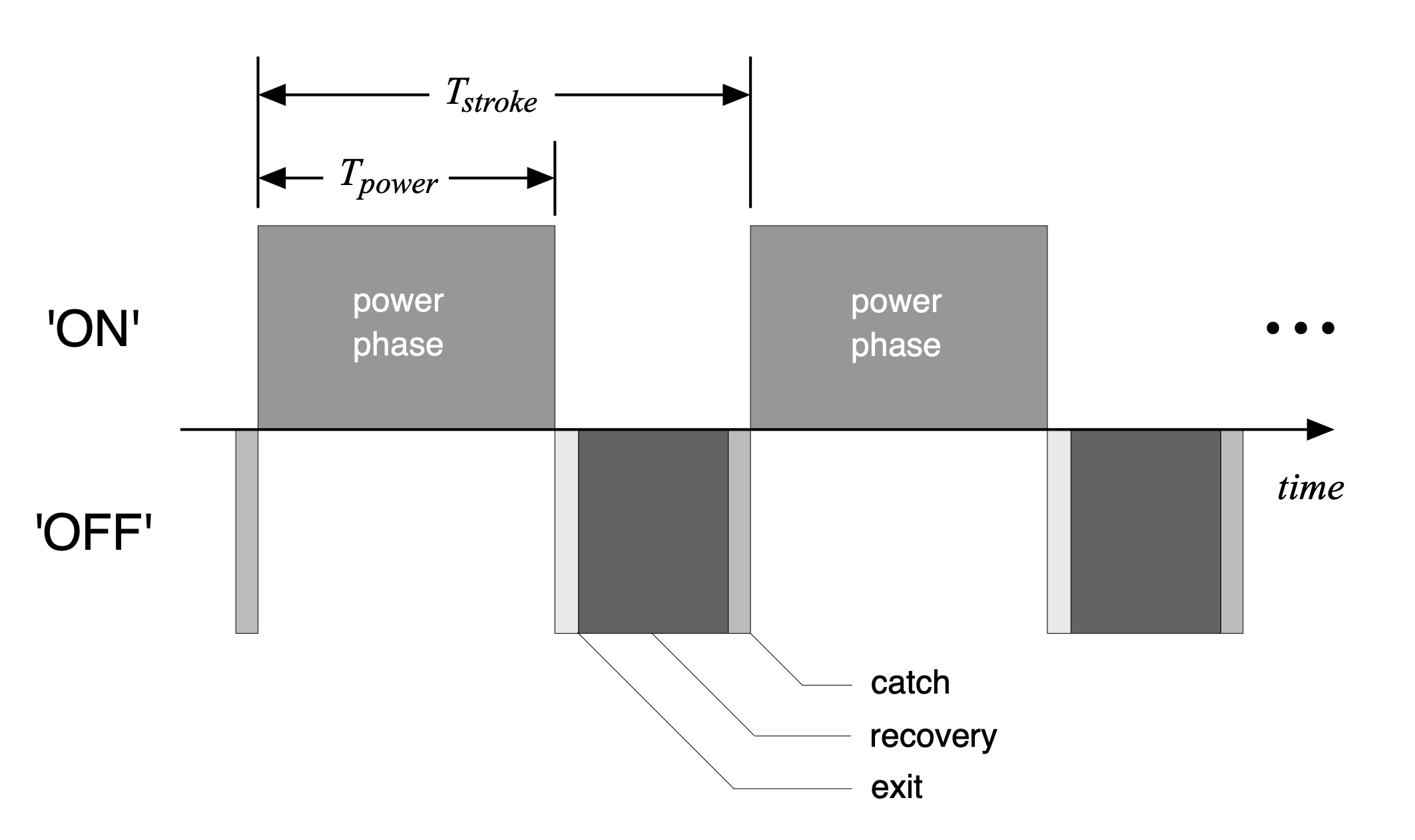 Since ∆t in the expression for impulse corresponds to the time over which the propulsive force is exerted, ∆t is the duration of the power phase Tpower.

This definition isn’t very useful if we wish to parameterize paddling in terms of cadence. Cadence is the number of strokes over a specified time interval, such as strokes per second (less common) or strokes per minute (most common). Consider the propulsive force versus time plotted in Fig. 5, which is just Fig. 1 with a few new quantities included. Per Table 1, the baseline cadence is 60spm (strokes per minute), or one stroke per second. The x-axis in Fig. 5 then covers exactly one stroke. At zero seconds the catch is complete, and the pull has started. Since per Table 1 the power phase is specified to last 0.7 seconds, the exit occurs there. Note that the paddle is still loaded (e.g., the propulsive force is greater than zero) at exit; we’ll examine that a bit later. The peak force is 52.4 lbf. Over the power phase the average force is 27.05 lbf, as indicated in the figure. This is the force we’d use to compute impulse, with a corresponding time duration of Tpower. 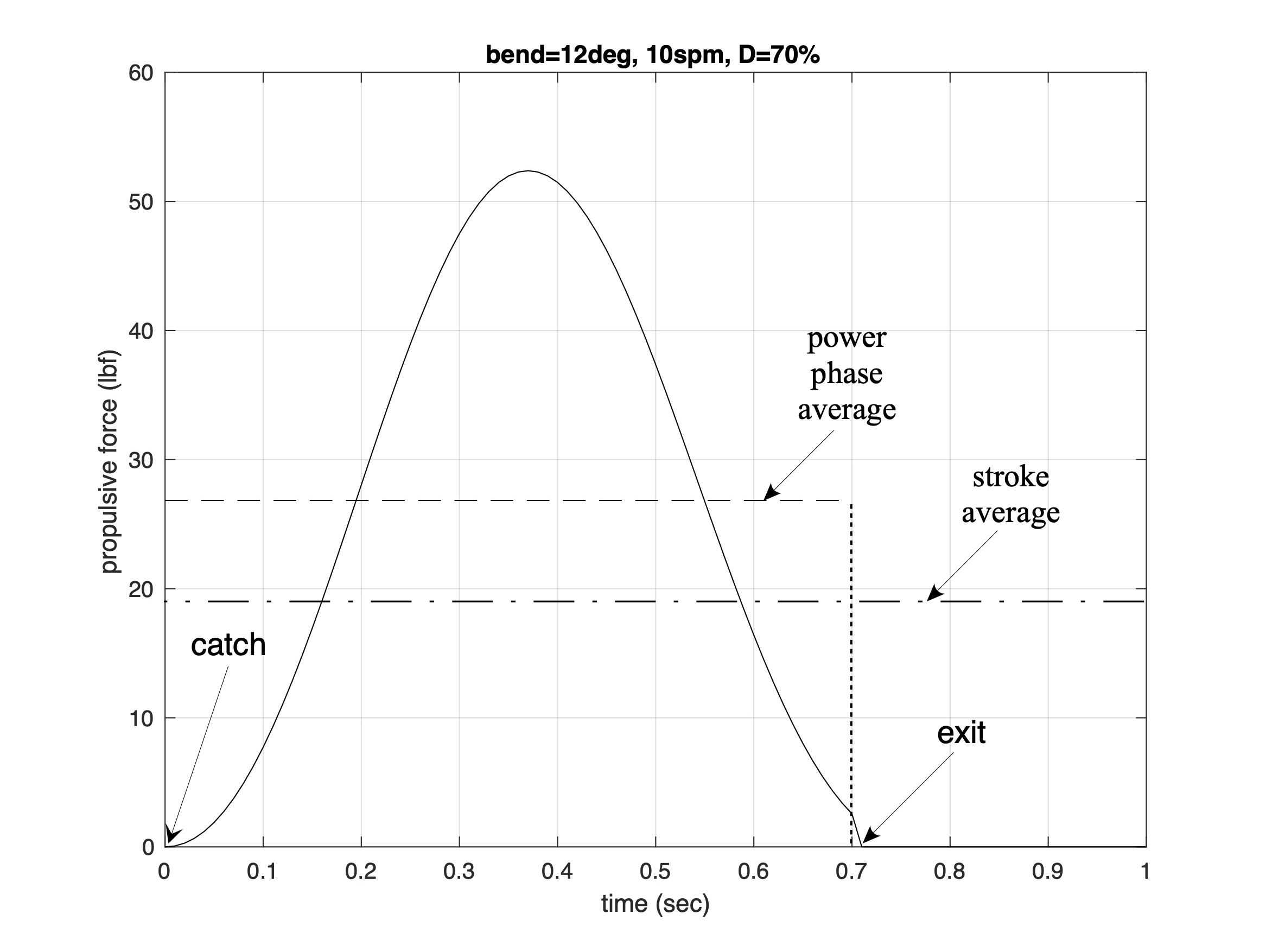 The impulse delivered over a stroke is then defined precisely by

The integral limits correspond to the end of the catch and the start of the exit. This equation is just a concise way of expressing what took us a few paragraphs to explain above. And we finally got to use some calculus. Yay!

We compare the impulse generated by each force curve by computing the integral defined above. The integral has units of force times time, and this time we’ll stick to mks units. The impulse quantifies each stroke’s ability to change the hull’s momentum, e.g., impact its speed. The results are listed in Table 2.

Table 2 shows that for a fixed cadence, shortening the stroke while maintaining the same peak propulsive force entails lower impulse. Consequently, for a given hull, you go slower with a slower recovery. 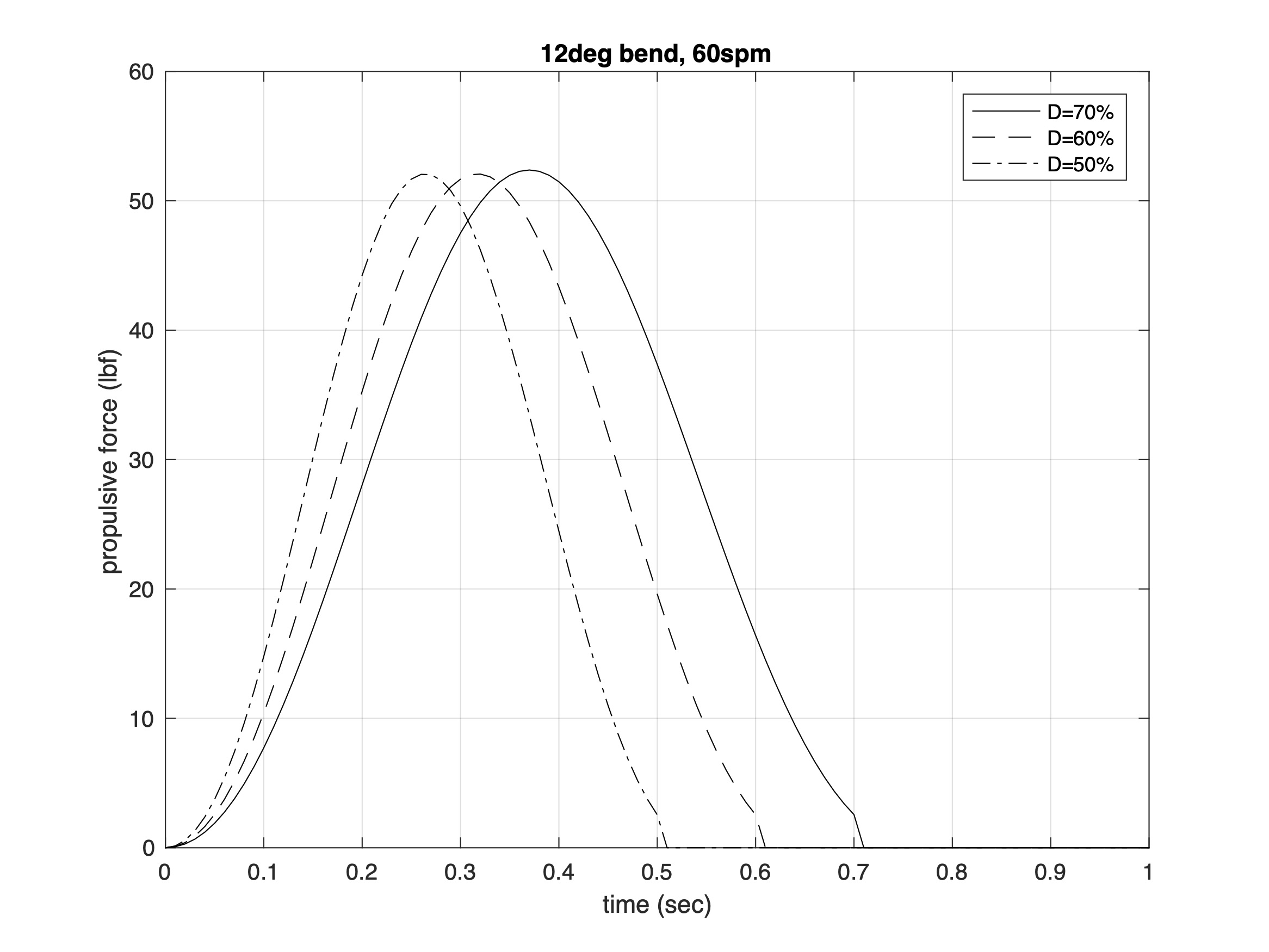 Alternately, one can keep the force curve shapes and their respective duty factors defined in Fig. 6 and scale the peak propulsive forces. These new curves are plotted in Fig. 7.[7] By scaling the peak forces, for a fixed cadence (here, 60spm) each stroke’s impulse is equal. Consequently, each stroke will equally impact the hull’s momentum and thus its speed. The peak forces for the three curves are 52.4 lbf, 61.1 lbf, and 73.3 lbf, respectively.[8] So if you want a slower recovery for a fixed cadence you need to up each stroke’s peak force. 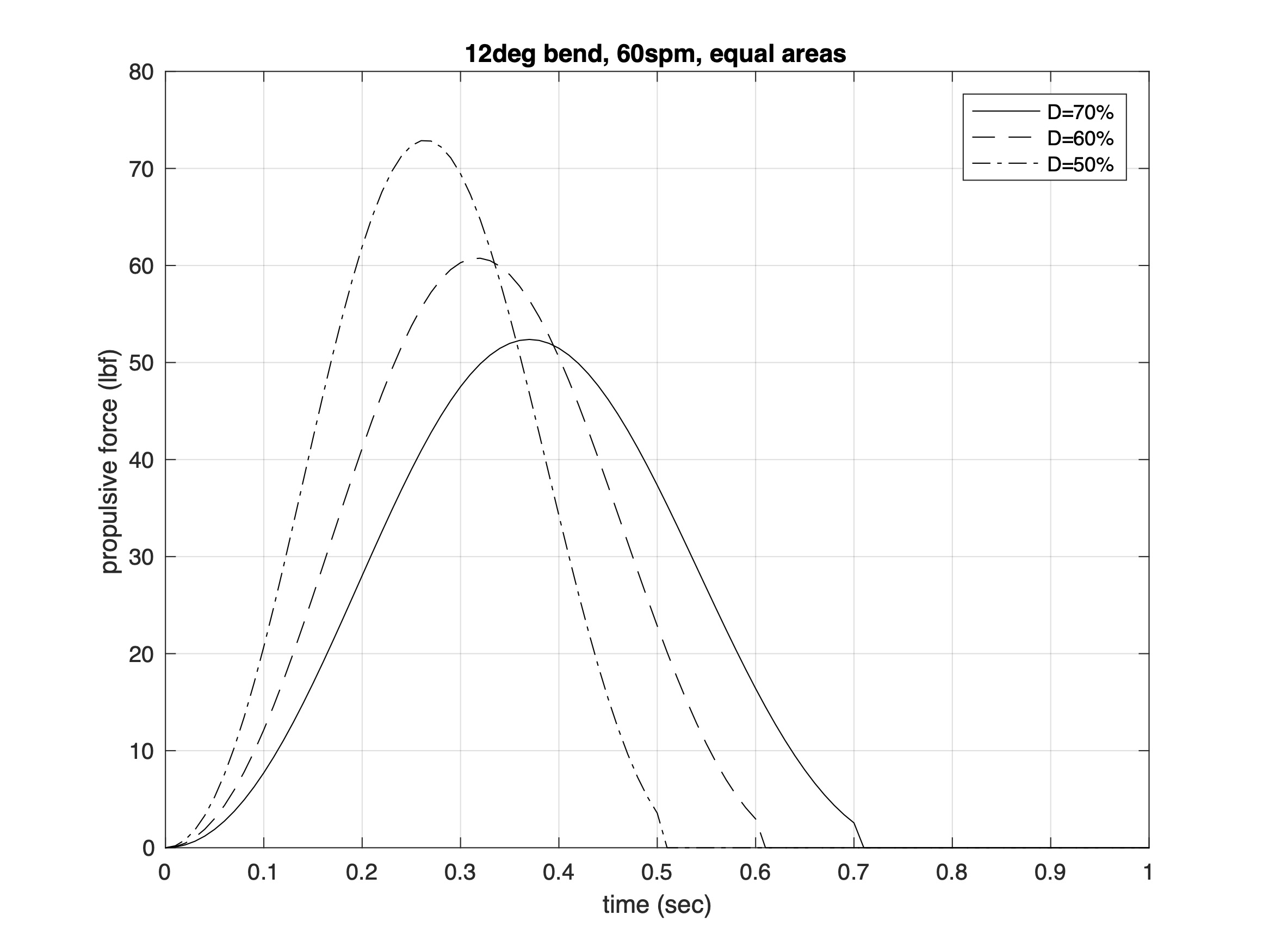 Finally, I wondered what happens if we cut a stroke short(er). Our baseline power phase ends with the paddle blade still slightly loaded, as shown in Figs. 1 and 5 above. What happens if we shorten the power phase duration of this stroke (e.g., decrease the duty factor D) for a fixed cadence? This is shown conceptually in Fig. 8. As before the force curve is generated using the baseline parameters from Table 1. The baseline entails an exit at 0.7 sec. The figure also shows force curves with exits at 0.6 and 0.5 sec. How much do we impact the stroke’s ability to propel a given hull with earlier exits? 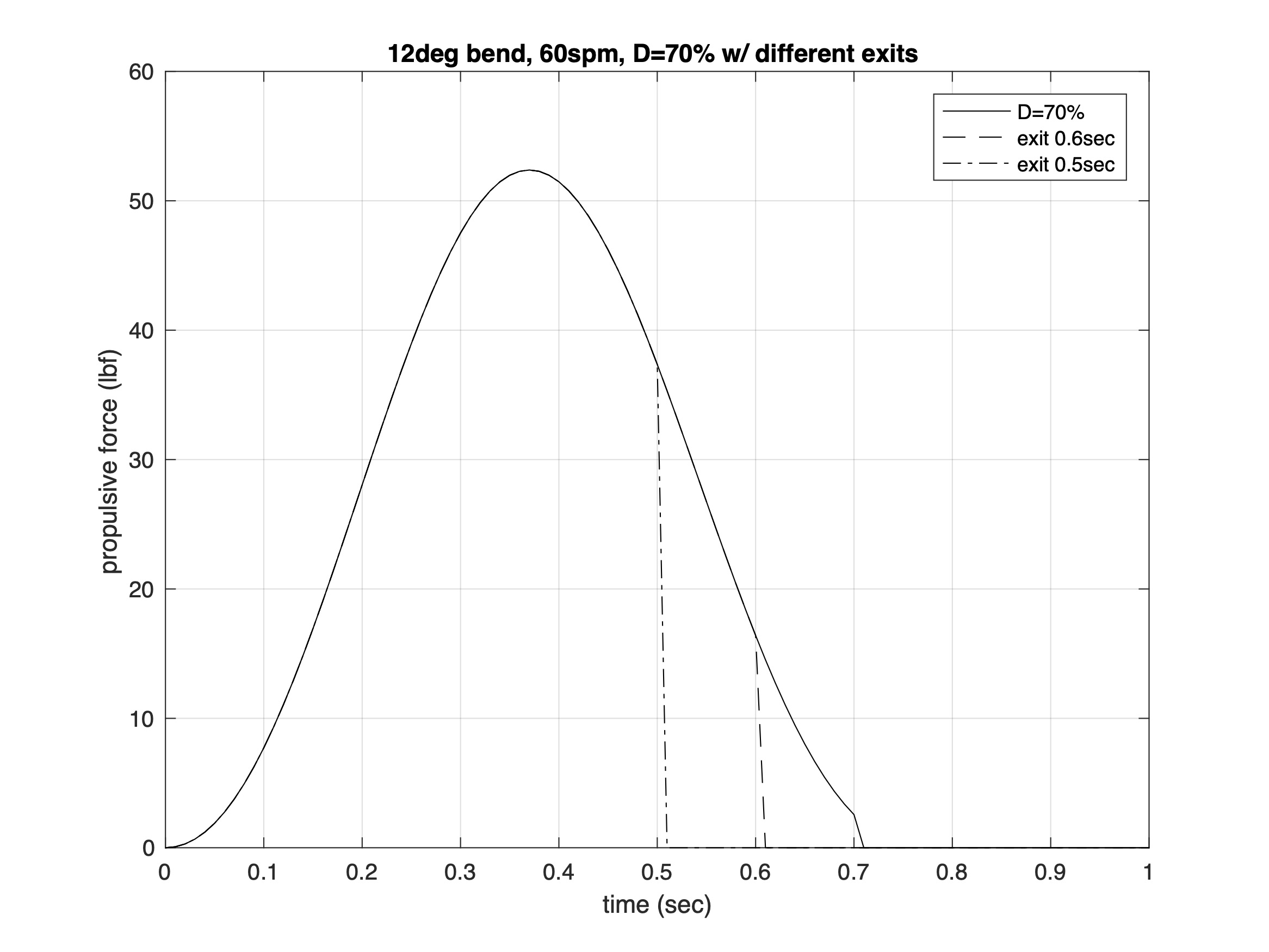 We’ll once again compare these scenarios using impulse. The results appear in Table 3.

We see from Table 1 that exiting at 0.6 sec only decreases impulse by 4.5%. To regain the “lost” impulse we must up the cadence from 60spm to ~62.8spm. I for one like an exit where the blade is a bit more loaded. In doing so we haven’t lost much area under the force curve by cutting off a bit more of the force curve’s “tail,” as seen in Fig. 8. That’s the sole criteria for determining and comparing impulse. And the increase in cadence is tiny.

Things get a bit difference when we exit at 0.5 sec. Impulse decreases by 18.6%, which requires upping the cadence from 60spm to ~71spm. Plus, the blade will be strongly loaded at exit. This scenario may be a bit extreme, but it drives home the point that an earlier exit entails cutting off some of the area under the force curve. The earlier the exit, the more impulse we lose.

Consequently, we can write our definition for impulse Dp in terms of work as

Work is also the time integral of paddling power P. As we did for our propulsive force, we’ll consider power to be the average power over a stroke. As a result, the integral becomes the product of average power and the stroke duration,

As we learned in Part 32: Home on the Ranges, when cruising in steady state average power is related to average velocity v via the hull’s drag coefficient CD,

Substituting this into our “convenient” result above,

As a check on our result, using our expression for Dp in terms of propulsive force and stroke duration, shows

In steady state the propulsive force balances the drag force, which is proportional to the velocity squared times the drag coefficient. This was derived in Part 32. Check!

Nicholas Caplan, “The Influence of Paddle Orientation on Boat Velocity in Canoeing,” International Journal of Sports Science and Engineering, Vol. 3, No. 3, pp. 131-139 (2009).

© 2021, Shawn Burke, all rights reserved. See Terms of Use for more information.